Yesterday, after hours pounding away at my keyboard, I finished….

I finished my novel.

I landed at 84,344 words. I was thinking it would be closer to 90k, but the story has been told and now we start editing. I have to go through it once, then send it to my mother. I know there are a few places I need to add some things, so I think this is close to the final number of words, which is ideal for a first novel.

After a quick trip this morning to the birth center to check on Liam (all is well!), Bill, Talia, and I headed out to Sullivan’s Island to have lunch. The famed Poe’s Tavern serves up the most AMAZING burgers, and given the theme of the tavern, it seemed an appropriate place to celebrate!

Bill insisted on riding his motorcycle out to lunch, with Talia and I following behind in my truck. When we arrived, we had a short wait for a table (the place is always packed!). We were seated and then approached by the manager (of course my first thought was “crap, what did I say???”). A patron, and Army Veteran must have seen the patches on Bill’s riding vest. He has one for his purple heart, another one for his time in Afghanistan, and one for his three tours in Iraq. The man had given the manager a $50.00 bill to pay for our lunch!!! I seriously almost started crying. It was an amazingly sweet gesture and Bill and I will be sure to pay it forward!!

If you’re ever in Charleston, SC, you need to visit this place. They recently opened two more locations, but we are excited to have ours be the original. Poe was stationed at Fort Moultrie, which is on Sullivan’s Island. It’s been long debated, but I really think when Poe refers to “The Kingdom By The Sea,” he is referring to Charleston! 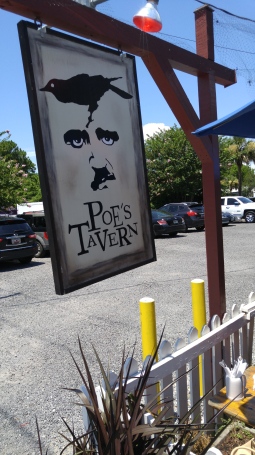 The picture is crooked because the sun was in my eyes! I had to take it blindly! Notice the Raven in the logo?

These two always love a trip to Poe’s!

The Goldbug! (Goldbug Island is right up the road!)

My handsome husband posing with Poe.

The menu. Sorry the picture isn’t great. It’s a tavern, so the lighting isn’t the best. If you can read it, you can see all the burgers are named after his poems. I had the Hop Frog burger while Bill had the Amontillado. I gave him cr@p in front of the server (Jordan, who was awesome) about the way he pronounced it. Turns out he said it right, I said it wrong, and apparently a “Redneck can read” as he proudly announced to everyone in our section! Love him! 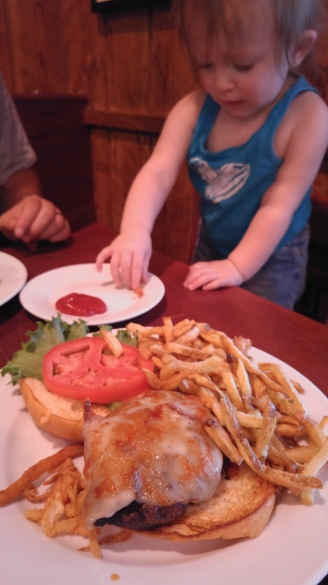 Talia loves dipping. She JUST eats the fries. She might eat a burger, but we didn’t bother offering her any…they are so good! This is my Hop Frog burger! 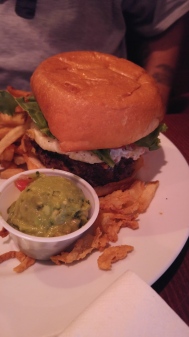 Talia checking out the art on the wall (all Poe themed.) The second picture is Talia looking like Ms. Hollywood…apparently I caught Bill off guard.

We had a great time celebrating, are really appreciative of the great meal and the vet who paid for it, and now it’s time to start editing!