Book Club: The Girl on the Train

BOOK CLUB IS BACK!

I finally feel as though I have my $hi+ together enough to return to book club. Liam is still sleeping decently and Talia naps well, giving me time to read and write. I’m also a bit more organized since we found everyone a routine. Also, I am finally back to not needing to nap each day either. Thank goodness! That was getting old!

While we were in Illinois last week, I picked up the book “The Girl on the Train.” I had heard great things about the movie, and the book nerd in me wanted to know about the book. I’m happy to report, the book did not disappoint!

Rachel Watson rides the train each day past her old house and the home of the mysterious new neighbors down the street. Distraught over her divorce from Tom, she spends her days drinking away her sorrows on the train and focusing on the couple at house number 23 (she used to live at 15). The couple she watches each morning seem to have it all. Rachel has imaginary names and lives for them, and wishes she had what they had, until the train stops for less than a minute and she sees something that will change her life forever!

I’m not normally a reader of thrillers, but I may start exploring this genre more! I could not put this book down. The characters are well developed and the plot is character driven. I found myself not wanting to put the book aside until I had more answers. With all the hustle and bustle of the holiday, I still managed to read the book in 4 days because I HAD to know the truth. The author, Paula Hawkins managed to take a clip of less than a minute in the lifetime of a bystander on the train and turn it into a fabulous read.

There were two things I found frustrating with the book. One is stupidly silly. The author is from England and there were several words in the book I had no idea of the translation. For example, the off-license is a liquor store (packy, package store, ABC store, etc.) Thankfully the context around most words I did not know made it easy to figure out.

The second thing I found a bit irritating was the timeline. The book is told from the point of view of three characters and the timeline jumps around. You MUST pay attention to the date at the start of every chapter. Each person is telling the story from a different place in time, and it sometimes goes back several months from what you just read.

In the end, I highly recommend this book and give it the full 5 out of 5 stars. I was really excited when my niece said she had picked up the book over the weekend and was already drawn into the story. 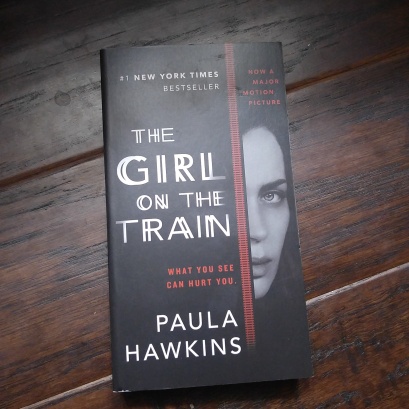 Because the book has been such a best seller, I imagine Ms. Hawkins will be writing another thriller. I won’t wait until it’s in mass market paperback, or a movie, to read it! I may see the movie out of curiosity, but the book was so good, I hate to ruin it!

What have you been reading? Share in the comments!